In school, we learnt that the greatest boost to human evolution occurred when our ancestors learnt to manage fire. Domesticating fire for the purpose of cooking is considered the supreme causal factor for hastening the evolutionary development of homo-sapiens. Today, no human group eats all of its food raw.

If we were to feed on only raw uncooked food, we would need to chew for more than 9 of our waking hours each day.

Without fire, even if we had the chewing prowess of chimps, which delivers them a rate of 400 food Calories an hour, after done gathering the food we would be chewing it for the rest of our waking hours. Either that, or an active brain of this size would not be sustained.

Ancient humans grazed constantly to find enough calories to survive, similar to the way apes and gorillas do today. Raw food, by mass, does not contain that many calories and thanks to Fire, a shift to cooked food diet was possible, that allowed humans to pack more into their daily meals. Receiving the extra calories effectively allowed our ancestors to divert efforts from the more mundane survival linked activities and kick-started the grand civilization and the myriad cultures we are today.

Research highlights another impact from being able to receive these extra calories - it allowed the human brain to evolve into a bigger and better powerhouse. The number of neurons in your brain and their daily working is largely dependent on the number of calories you can consume in a day, and there are only that many hours in a day. Prof. Richard Wrangham presented the above perspective in his book, Catching Fire: How Cooking Made Us Human, in which he explains how fire shaped humanity.

Around 900,000 years ago, fire was domesticated into our hearths, coinciding with a peak in glacial activity and global cooling, and fire helped the genus Homo to survive. This was the period of our ancestor Homo Erectus, who evolved a better brain after learning the ability to cook food into a readily digestible format. The freeing up of calories from other foraging activities released energy for the brain to develop faster. Fire therefore, delivered us from the laborious and time-consuming task of digesting raw food, unshackling us for other sublime activities.

Domesticating fire was indeed an epoch changing event, mutating nomadic tactics, allowing the human species to settle down, practice agriculture, develop pots and pans and weapons, to move into more scientific pursuits and some others whimsical. Fire symbolised power and epitomized control, with all ancient cultures having a fire-god empowered with this force!

In most mythologies, fire is said to have been stolen from the gods. In Greek mythology, Prometheus a Titan, did the forbidden and stole fire from the gods and shared it with humans, thereby incurring the divine wrath of Zeus (king of gods) who chained him to have birds feed on his liver eternally. In Indian mythology, the Rig Veda tells of Mātariśvan, the individual responsible for bringing forth the knowledge of production of fire by friction; Agni (fire) had gone into hiding and was rekindled from afar by Mātariśvan, who in turn earned the respect and praise of both the gods and mankind.

Fire and controlling its power has been always admired and our sciences have evolved largely around tapping this source of energy.

Even in folklore, whether the person was revered or punished for sharing such knowledge, the domestication of fire at the hands of humankind was considered a significant turning point.

Most of recent industrialisation and the powerful machines we use, depend on some fiery form of energy. But fire has not always been beneficial and misuse of its destructive force is well known. Control of Fire also brought about most of modern day ills – higher population growth from more assured food options, sedentary lives and a comfort zone beyond naturally sustainable means. Even the discomfort of cold is now countered with artificially generated heat.
"Civilization is at a tipping point - our capacity to feed our numbers is a matter of increasing concern"

Our civilization has reached a point where our capacity to feed our own numbers is a serious matter of increasing concern. Science helped increase food production but all food is organic matter and most of it perishes before it can reach people. The science of delivering what we produce needs more… it now needs harnessing the power of ICE. 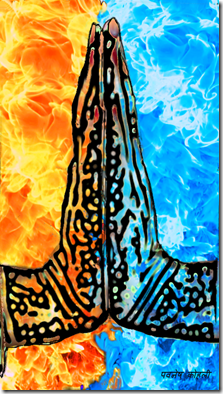 It has become imperative that mankind fully grasps and controls the power of ice, so that our species can continue to thrive and prosper.

The process initiated a hundred or so years ago, with the advent of mechanical refrigeration & transport. Today, cold-chain or the use of temperature regulated distribution-based logistics, is a common phrase. The success of cold-chain depends on how well we are able to manipulate its effects and counter its negatives.

The majority of refrigeration today is based on the same key principle, that latent energy is released from a phase change that is forced upon a cooling or refrigerating fluid.

This has not changed from that millennia ago, when first used in what was then India. Most recent scientific research has since been directed to developing cheaper or more efficient refrigerants and of late for those that have a lesser impact on our environment.

In physical terms, the counter to fire is ice... surprisingly, there are no “ice gods” in mythology

In recent decades, a few other refrigerating methods have also been developed and deployed. Thermo-electric cooling is the temperature differential achieved at an electrified junction of two different conductors. Also called the Peltier effect, it is used to create refrigerators with no circulating fluid or moving parts. Magnetic refrigeration utilises the magnetocaloric phenomena or adiabatic demagnetisation wherein a temperature change is caused by exposing a material to a changing magnetic field. Very low temperatures <10°Kelvin or (minus) -263°C can be reached. Acoustic cooling is another technique, where sound waves are used to produce the cold.

We are far from fully understanding and harnessing the cold. Conventionally, the cold was viewed as something to be kept at bay – maybe a reminiscent of ICE age fears! Though, it is now being recognised that to feed out populace, cold-chain and use of similar allied sciences, is crucial for the future of mankind.

Fire & Ice need to work together, for our civilization to step into the next phase of evolution. If we ignore ICE, it will only be to suffer a burn out, to stagnate and waste away.

This is a new epoch, the age when both Fire & Ice must work together, where our evolution stands on a brink, ready to take another leap forward! This is to surely be the age of “Fire & Ice”
- Pawanexh Kohli
http://www.crosstree.info/Documents/FIRE & ICE.pdf