Cold-chain has at its heart the concept of temperature control. This elicits many other requirements, some which are needed to counter the side effects of such thermal regulation. Yet, refrigeration is a primary need and this places a demand for energy, sometimes an inordinate amount, which is converted into the desired thermal change. Usually, the most common form of energy used is electrical, which in turn runs refrigeration equipment.

The highest energy load is from compressing a refrigerant, which is later expanded in the evaporator to affect the cooling experience. Electricity is available from our grid – thermal or hydel, from solar incidence, wind power, from fuel cells, fuel powered turbines and generators. This electricity can also be stored in rechargeable cells or batteries. Cold too can be stored!

The majority of energy expended goes into managing the refrigerant, expansion of which causes cooling. If a cold fluid can be accessed, without recourse to refrigeration, the entire energy load would drastically come down.

One cool energy source is geothermal water – underground water from deep wells are normally around 22°C to 24°C all through the year (temperature of groundwater is generally equal to the mean air temperature above the land surface. It usually stays within a narrow range year-round).

If we required maintaining a room within this temperature range, circulating ground water through cooling radiators (like heating radiators) would be a very low cost method. In fact, cold stores are advised to use this technique to partially reduce their energy load by circulating cool water from underground source (keeping in mind that the water must return to earth in a closed loop). The cold energy from such water, if wasted or lost to air, such as when used to water gardens, can be termed as stranded cold.

To affect Vapour Compression Refrigeration, electric power is converted into physical force to compress the refrigerant. This in turn undergoes a phase change, which next in turn is released through an orifice, expanding to its natural state once again, and this is used to bring about a temperature change in its carrying coils. Another motor (fan or pump) in turn then circulates the medium (fluid like air or water) to be cooled around these cold coils to transfer the cooling effect to other surroundings. Plenty of steps, and some, which are not mentioned, by the way!

What other sources of Stranded Cold can we tap into and utilise in the process of cold-chain, to optimise or reduce the need to produce cold! How about looking at LNG regasification terminals!


LNG is liquefied natural gas, the liquefaction being done through the process of active refrigeration. This process is undertaken at production centres, principally converting the natural gas into liquid form, which can then be transported in large quantities on ships. Liquefaction happens at temperatures lower than -160°C, its boiling temperature. LNG carrying ships maintain the LNG cargo at these cryogenic temperatures lower than minus -162°C (-260°F). Storing LNG at this temperature is akin to storing water at its boiling temperature or 100°C. At the receiving end, prior to consumption, LNG is regasified and distributed through pipelines as natural gas or in compressed form as CNG.

The process of regasification, simply put, is a reheating process. The acute minus temperature, cryogenic cold, is discarded in this process, carried away through seawater exchange or dispensed into open air. The LNG is boiled off into its natural gaseous form and the gas is brought up to an ambient temperature so that it can be safely handled and carried away in pipes of the gas grid, etc. The amount of energy discarded – the Stranded Cold – is of a very high order. For every million cubic metres of gas reconverted from its liquefied form, approximately 20MW of cold energy is lost.

Cold-chain operators can conceive of the opportunity in utilising this waste cold, stranded energy, just perfect for cold-chain. Visualise an over-the-fence cold-chain facility adjoining every LNG port terminal, capturing and bringing into use megawatts of cooling, more than could be needed in the whole year. Piping the excess of this extreme cold to use for liquefying air or nitrogen is yet another option. 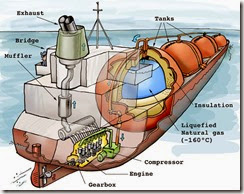 Natural Gas when transported on ships, is cooled to below its boiling point, less than -160°C and shipped in liquefied form as LNG (Liquefied Natural Gas).

• This liquefaction process happens at loading terminals and the temperature is maintained during entire transit, including after discharge at receiving terminals.

• The product is used by consumers in gas form and therefore the liquid (LNG) undergoes a regasification process at receiving terminals before distribution.

• This regasification or warm-up process can include multiple methods, all of which involves heat transfer to circulating fluid – seawater, air, water glycol mixes – which in turn is not used.

There are possibilities to recover this waste or stranded cold for use in other applications, including cold-chain applications.

Recovery of Waste Cold:
- The heat transfer fluids from regasification process can be directly circulated to enclosed insulated spaces to utilise the captured cold for storing of temperature-controlled goods.

- Captured cold can be stored as cryogenic fluids including extraction of Liquid Nitrogen or Liquid Air as energy banks for other selected use.

- A combination both above (buffered energy store and direct heat exchange), is expected to be the best option to utilize the high-grade (more than -162°C) energy source.

Other Innovative applications:
• A cluster of users of such stored cool energy can be conceived around LNG terminals. This recovery of waste/stranded cold can be used directly for cooling needs and in stored form (as cryogenic fluids).

• The recaptured cold energy can be piped to across-the-fence, co-located cold stores, applied in lieu of normal indoor cooling units, minimizing the cost of refrigeration.

• Other possible applications include the use the cool energy for freeze-drying of horticultural produce (onions, etc.), for cooling of buildings under human occupancy, etc.

• The cryogenic fluids can be used to power turbines, or for refrigeration equipment on road and rail.

• Motive engines for vehicles like forklifts using liquefied air or nitrogen are in development, the prime driver (engine) functions without combustion. This is a zero pollution application as ‘exhaust’ is clean.

Such development opens up scope of developing dedicated port gateways for perishable cargoes with on-location phyto-sanitary checks. Reefer containers can be stuffed/destuffed at such port hubs, instead of incurring logistics delays & demurrage.

Specialised road and rail connects can transpire & all this will serve as a future ready platform, as India develops into the food basket of the World.
time 8:25 pm