Insights into Food Loss and Waste

A High Level Panel of Experts on Food Security and Nutrition (HLPE) was established by FAO (Food and Agriculture Organization) in 2010 as the science-policy interface of the UN Committee on World Food Security (CFS). On 3 July 2014, the HLPE published report #8 titled “Food losses and waste in the context of sustainable food systems”. 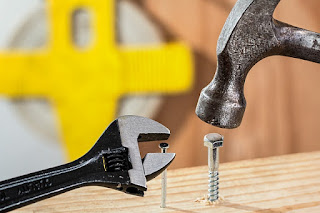 At its onset, the report states that accurate estimates of losses in the food system are unavailable, though it reiterates that best evidence at hand indicates that global food waste stands at 1/3rd of production. It goes on to state that myriad approaches to defining food losses and waste tend to be confounding.

For the referenced report, the following definitions are used. Food Loss and Waste (FLW) is “a decrease, at all stages of the food chain from harvest to consumption, in mass, of food that was originally intended for human consumption, regardless of the cause”. Some key phrases here is “in mass” and “for human consumption”.

Consumption level is inferred as in the hands of the consumer. Therefore, losses are easily attributed to the post-harvest supply chain and the waste is clearly ascribed to the consumer.

There is also loss through degradation of quality attributes of food, and it is proposed to define those independently and separately, under other metrics subject to cultural perception, nutrition aspects, etc..

In reviewing this report, it is evident that overall, on a per-capita basis, much more FLW occurs in the industrialised world than in developing countries. South/Southeast Asia which includes India, is the most economical with its FLW. In fact this region, on a per capita basis incurs only half as much FLW as most of the rest of the world. 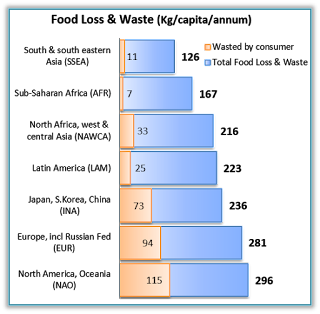 Per capita FLW
(HLPE, 2014. Food losses and waste in the context of sustainable food systems. A report by the High Level Panel of Experts on Food Security and Nutrition of the Committee on World Food Security, Rome 2014) 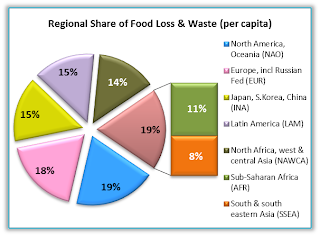 It is to be well understood that this relates to “physical” loss & waste. FLW does not factor in loss in value (though physical loss also adds to value loss) - value in the food supply chain generally accumulates with each series of logistical activity and transaction. Therefore, when we hear talk of value loss it can make sense only when considering a specific value point in this relation.

For instance, at a recent summit, when enquired if it was true that we lose 40% of produce in value; my response was that this maybe incorrect and the value loss can be more than 100%. If a Rs. 5 of input (production level) cost is sold at Rs. 50 (market value), then truly, any physical loss would translate into a notional value loss of Rs. 45 per unit mass i.e. 900% of the input costs. In considering accumulated value along the chain, the correlation to value would depend on multiple variables, basis where and when in the chain the actual loss occurred… effectively, the physical loss (in mass) has multiple value points ascribable. If we consider only the input value (total at-harvest cost), then quantifying the physical ought to suffice as the basis for most developmental purposes.

South & south eastern Asia having the lowest per capita FLW is not cause for celebration. When we factor in the heads or population count, this region ranks number two in total quantity terms (chart below indicates lakh tons per annum).

What is heartening, is that in regions where tradition and cultural habits accommodate an existing respect for food and its worth, it may be is easier for such societies to grasp upon some minimal changes that can further reduce FLW in their region. The key reason is evidently not poverty, since Africa and Latin America have a far larger share in FLW. A cultural respect for food, indicative in Southern Asia, seems to make a difference.

The primary causes of food losses and waste in low-income countries are largely linked to the shortfall in the infrastructure, management and technical resources - for harvesting, post-harvest handling and supply chain managing. An efficient supply line will necessitate appropriate packaging and marketing systems as well as coordination at transactional levels, minimising breaches when handing food in the logistics chain.

On the other hand, in developed countries the losses are also attributed to similar supply chain breaks, a lack of coordination in the logistics, as well due to farmer buyer strictures. The far larger ratio of waste that occurs is due to consumer behaviour and apathy. This could stem from marketing influences. coercing buyers to procure more than they need including other cultural and social practices.

While food waste contributes to increased demand, and thereby feeds supply side needs; food loss leads to lowering the access to food contributing to food insecurity.

Any logistics (perishables) expert would inform you that countering transportation losses, better described as in-transit (to consumer) losses, are the most critical and crucial to any long term solution. This includes excursions from control, during the loading, unloading, put away and pick up operations. Wherever other delays manifest enroute, the perishable inventory in motion is put at even greater risk (to physical mass and end value realisation). Such delays also shorten the marketable life span and hastens the lead-up to loss. "Strengthening the cold-chain offers clear advantages."

The losses that happen in the food chain, during pre-conditioning stages, enroute or distribution, can of course, be worked upon to resolve or mitigate. But what if there is a basic lack of such a chain of activities to start with…

In such cases, where no supply side logistics exists, it almost always means that food loss will occur – the surplus produced will perish before it can be gainfully consumed. A shortfall in the availability of the services that can deliver to consumer is a zero gain situation. Of course, this is heightened when related to goods that perish with time. Given that many smallholder farmers are the producers of perishable food items, a delivery mechanism to consumers has an immediate and beneficial impact on their livelihoods. Developing such delivery systems in turn would mean a reduction in food losses.

Strengthening of the cold-supply-chain has clear advantages. This will also require encouraging small farmers to collectively upscale and the facilitating of their marketing. More importantly, it requires logistics players to step up to the fore and do what they can do best. There are many roles to be played, by both the public and private sectors and the experienced players now find the field has been well prepared for the food games to begin.

"Let us also not speak of loss in value et al, and limit the discussion to loss in mass of what is designated food. Let us not attribute trimming, de-podding, pre-harvest culling, etc. as food loss, at least not until technology arrives to manufacture leaf shavings into human food."