In December 2014, the Japan Metreological Agency had declared the onset of El Niño, on the basis of a rise in the ocean temperature alone, though other atmospheric conditions had yet to manifest. In March 2015, the Climate Prediction Center of USA confirmed the arrival of the El Niño conditions. Though these conditions are weaker than expected, and have manifested much later than was foretold, scientists have predicted that 2015 will be the hottest year in recorded history.

Preparing for hot temperature operations:
Raised air temperatures directly impact on running efficiencies or the mechanical equipment, increases machine breakdown risk and can even damage old rubber seals or cause physical distortion in some structures. All cold-chain operators, should evaluate the age of their mechanical equipment, insulation and review their periodic maintenance systems. Damaged insulation should be renewed or repaired, oil changes are advised in all mechanical engines (reefers, generators, compressors, etc.), rubber gaskets can be renewed ahead of normal cycle. El Niño can result in a dryer than normal environment, hence, expect more dust and keep extra air filters handy. Calibrate all temperature sensors, as well as high temperature cut-outs on equipment. Consult your engineering support teams for individual maintenance needs.

Keep your ante-room equipment in good order to avoid risk of temperature excursions. In case of stored products that require frequent fresh air replenishment, re-evaluate your practices so as to conduct this activity at the lowest temperature point of a day. Where feasible, adjust to skip a refresh cycle in the peak temperature period. During hot dry spells, rodents and birds will try to access your cold spaces, keep pest prevention measures at peak. High sea and air temperatures can also result in unnatural monsoon rains - keep roofs, gutters and drains clear; replace brake pads and wipers of your reefer trucks in advance.
About the ENSO phenomena:

El Niño - is the warm phase of ENSO (El Niño Southern Oscillation) - a phenomena that occurs on average every 5 years and disturbs sea surface temperature patterns in the Pacific Ocean, and weather patterns worldwide. The opposite, or the cool phase of ENSO is called La Niña.

In Neutral Conditions, the easterly Trade winds in the Pacific Ocean, blow from the west coast of South America and piles up the warm water along the eastern shores of Asia. Along the shores of Indonesia, the sea level is normally almost half a metre higher than that off South America, with sea temperatures also about 8°C warmer. The warm sea water off Asia, results in the rain cycle and shapes the jet stream which in turn profiles the weather systems globally. 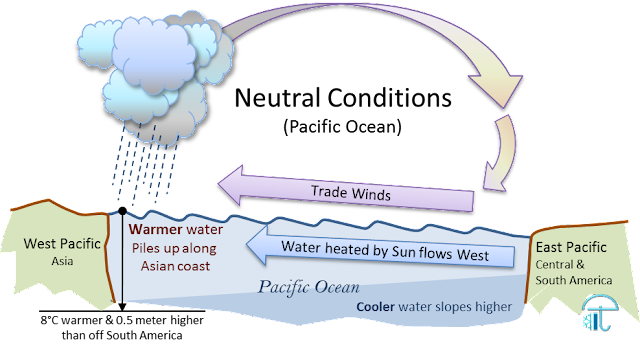 Every now and then, on average 5 years, the Neutral Conditions get disturbed due to a change in the wind and water distribution patterns and the rainfall zone in the Pacific shifts eastwards. 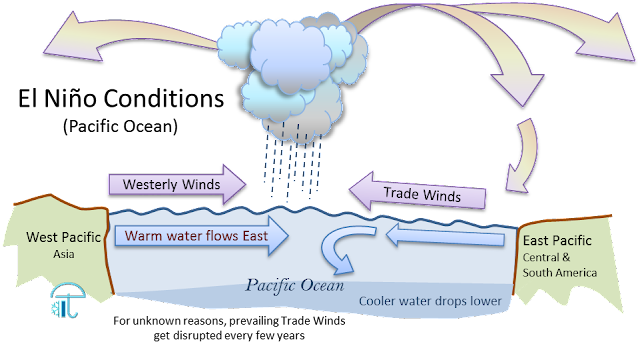 Due to much debated reasons, the prevailing easterly Trade winds in the Pacific get disrupted, and the warm water off Asia being at a higher level, starts to flow eastwards, getting pulled down by gravity. A persistent westerly wind from the Asian shore is also set off and the cold water incline (thermocline) below the sea surface changes. This results in a shifting of the jet stream, causing weather disruptions worldwide. In India this can result in droughts, a following rise in the Indian Ocean temperature, which thereafter has consequences in the form of heavier than normal rains.

A natural phenomena, the El Niño cycle is not fully understood but has been observed to occur repetitively every 3 to 7 years. It’s effects are not limited to Pacific Ocean temperature fluctuations, but are known to impact flood and drought occurrences globally. Old farmers in rural India, can share traditional folk lore and poetic sayings that narrate of a five yearly cycle of drought. This seems to stem from a traditional memory mechanism that may relate to the effects of the phenomena now known as El Niño.

The Oceans absorb the majority of the extra heat put out by global warming, and during El Niño some of this heat is released back into the atmosphere, which causes a warm up, worldwide.

El Niño 2015 is expected to push temperatures to new highs globally, peaking between June to August in Asia. A strong El Niño, has a ‘butterfly effect’ in impact elsewhere. The changes to precipitation patterns by an El Niño can effect the occurrence of tropical cyclones, floods, drought, etc. These in turn have direct effect on flora fauna of regions, agriculture yields, etc.