What’s with Solar panels and their usage…

Why do stand alone SME industrial units, homes and I include cold storages, shy away from installing solar panels to generate electricity?

Yes, cost is a factor as always. But that is one factor that is continually showing a downwards trend. (Today, if reports are true, the selling price per watt of solar photo voltaic is about 0.50 USD. Reports also suggest that this price is expected to come down to 36 cents per watt in 5 years. Past records show that in 1977 the price per what stood at USD 76 per watt). 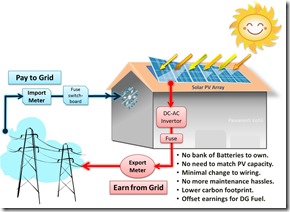 The other reason quoted is the hassles of operations and maintenance. This is typically because the implied concept of Solar PV panel requires the use of a bank of batteries to store the cheap electricity. And batteries need to be replaced every now and then. The electricity that is generated from solar insolation would need to be stored in batteries, which in turn would be sourced to create AC power for use in common utilities. Another limitation for industries is that they may need 3 phase input into their machines.

But why store this electricity, why bother with batteries and et al? What if the solar power is fed directly into the local grid. I am not talking about sharing the surplus generated with the grid… the concept is to feed ALL that the sun generates for you, straight into the grid.


What one uses off the grid, one pays for as usual. But what your panels feed into the same grid, earns you the same rate per kWh. This means you keep both circuits independent of the other, the grid being the main backbone.

Sure, such a mechanism does not serve the purpose of continuity of power or as an off grid reserve system – there are no batteries.

No batteries mean none of that initial cost, no recurring cost for the replacing them, no worries of maintaining a separate ventilated room, compliance concerns, etc. in fact, in all likely hood, the sole maintenance cost would be that incurred for an odd clean-up of the solar panels surfaces.

The other advantage is that a meter measures what you output off your panel installation, and you get paid for the electricity generated. For example, if you consumed 20kWh in a day, and fed 10kWh into the grid, you end up paying for only half the power you consumed.

I came across this concept and thought it would be a great idea for our cold stores, most of which are in rural or semi-urban areas. Most complain of the high cost of energy which bites into their operating margins.

What if each cold store was empowered to install solar PV panels, say with an average 100,000 watt output. Going as per peak power loads in such a facility, 100 kilowatts generated every hour would help a cold stores needs but imagine the number of batteries that would need to be maintained. Yet this 100kW when fed into the grid, could help power the equivalent of one thousand street lights of 100 watts each.

We have about 6000 colds stores in the country, and if we had 30% of them feeding the grid at 100kW each, it would mean the grid gets 200 MW of green electricity during sunlight hours. The panels would additionally reflect the solar incidence on the cold store roofs, reducing heat load in turn reducing the refrigeration load.