War in the Indian Ocean

Enrica Lexie: Have we asked all the relevant questions?

Any modern merchant ship is a well trained and disciplined organisation – not because sailors are necessarily more enlightened, but because their survival depends on it (between PSCs and Audits and Drills and Logs and Mother nature).

By very definition, discipline is a qualitative phrase but that quality to it is refined by repetitive enforced recurrence. Further, there is one phrase drilled into the psyche of a seagoing professional – “Call the captain” and represents the hierarchical nature of the merchantship order. There is no action, diversion, role play, ever.... without the ship’s master being informed (as goes the concept). [The exceptions (even if it be an extended drinking party or fixing a fused nav light) are always with the ‘trepidation’ that the captain oughta've been informed.]

Enrica Lexie is an Italian merchant tanker ship and in Feb 2012 allegedly fired upon and killed two Indian fishermen off the coast of Kerala. This incident has caused much international debate and has raised various concerns on armed gumen on foreign going ships. This case is discussed in highlights in the following paragraphs.

See Figure: White arrow depicts typical ship route from Singapore towards Red Sea, entering from the Gulf of Aden. The red cross is ~20 miles off the sea side town of Alappuzha where the killing occurred on 15-Feb-2012; and ~200 miles off the typical route.

She (Enrica Lexie) plied the Red Sea and the Gulf of Aden frequently – she was aware of piracy, its risks and their modus operandi in such prevalent areas. [BTW, for those who have forgotten, even the Malacca straits had an equal reputation when we used to sail those routes a few decades ago – anyone remember the attacks enroute to/fro Singapore from those days.]

So, since Enrica Lexie and her command were familiar with the waters she sailed and obviously (perforce) party to the ISPS code and had a clear drawn SSP and a designate SSO on board – why then did they shoot to kill, and so early in the engagement.
[for the uninitiated: ISPS code defines the security practices in port and at sea, basis which a ship has a Ship Security Plan which requires a designated Ship Security Officer who records / monitors and assigns action tasks in such matters. There is also a necessary Company Sec officer and compulsory liaison with various designate international authorities].

The next query is what ROE (Rules of Engagement) were laid down for adoption on Erica Lexie....and what kind of training and discipline she enforced on the staff. Was their action in tune with their declared ROE [Every SSP - and no ship can sail without one - has defined rules of engagement with pirates and stowaways, etc; documented training drills are compulsory].

Erica Lexie fired upon and killed people – not in the face of counter fire, not when under direct attack, not seemingly under any ROE practice – but purely triggered on perception. It is similar to an airline pilot shooting blindly through his door on hearing a knock. And in this case, it was not even a knock!!!

I propose that there already exist rules and controls that should have dictated actions. I heard tell that oh, the poor sailors are under so much pressure that the chain of command is frequently broken down. Oxymoronic, all references! Whilst yes, pressures exist & differ some from those of an army man facing fire, of a police man guarding a street in Kashmir, of a fisherman fishing in rough seas..... these are still similar in origin and overlap in extension and are well catered and proudly managed.

We all evidenced (and I was always proud of) the army that did not fire upon women and children in Sri Lanka (IPKF days), of the police that braves fire bottles with shield & batons, and of fisher folk on shallow draft boats braving sea (& piracy as well).

And we do not condone where otherwise happened. [Did we excuse the policeman who went into over kill ‘encounter’ mode? Did we agree with the under pressure soldier who shot civilians because a car start was loud, or even the king of his castle who shot and killed a mango plucking intruder?] Errors and omission under pressure can be duly considered when defining punitive judgement; but no civilization can or should relieve one's sanity over a temporal excuse. Homicide can be scaled in intent & atrocity but certainly not glossed over!

Any sailor of experience will share witness of how fishing boats and even crafts of leisure will sail close past them. With those on the bridge cursing them for not altering course....how many will also tell you of occasions where they too will wave sticks and shafts across at the ship ‘coz you cut the path of the fish they were following.... In fact, in most cases in open sea, a fishing boat will have right of way over the powered larger ships.

....and many others will also share the practice and drill they prepare to counter a boarding or suspect pirate attack. None will advocate literally shooting the buggers even before first sign of positive hostility. Mind you, two mobile floating contraptions passing half a kilometre or so apart is not considered a sign of hostility. So, was there any attempt at boarding – the last we hear they were 250-300 metres apart [more than a quarter kilometre away].

Now to technicalities – typical action when under perceived threat of a boarding:
These above are not only commonsensical, civilized action patterns; they are the typical action guidelines documented on ships. [Some carry instructions that no direct confrontational force be used.]

So, what was the threat adjudged and how was it countered.... that is the question and the answer to the incident.

Here is the ‘killer’ – if they were already in perceived pirate infested area, warnings received etc  - had they taken pre-emptive action? The usual stuff you know, like barricading, teams ready, extra patrols and more importantly: all lookouts with walkie-talkie in constant touch with bridge and captain. Under heightened threat perception these are typical measures any sailor worth his salt is aware of. More so, these are now a matter of documented policy on all ships – part of their sea worthiness certification. Was there any record of such preparation, did the SSO log this mandatory procedure and were all on board anti-piracy teams (including the armed guards) kept in constant walkie-talkie contact. Isn’t all this part of their SSP? [if no such pre-emption was undertaken, there was obviously no threat level or warnings issued for this area and definitely no call for premature shooting - to kill]. No, I suspect this incident stemmed more from a nonchalant disregard to events, exaggerated fears and possibly a healthy mix of 'international' prejudice.

If you are truly a sailor, any perceived attack and consequences – would be shared with the nearest RCC, coast guard, a diligently logged safety transmission and a channel 16 to all ships.... A piracy attack would be announced on all emergency broadcast procedures. [was this basic procedure of announcing to all and sundry followed? Surely the nearest coast guard was apprised and Mayday transmitted if under attack]. Even an incident not directly involving any other party like a man overboard or an unusual sighting of a floating object is readily transmitted... surely a shooting and perceived terror threat would have been hailed outwards on all channels loud and clear. Once again, these are mandatory procedures ...or were they truly ignorant of this basic tenet?!? When in dangerous situations, the response plan include, a designated officer of the bridge who mans the panel and not transits safety alerts, both for assist and as a warning of the vent to all other maritime traffic. 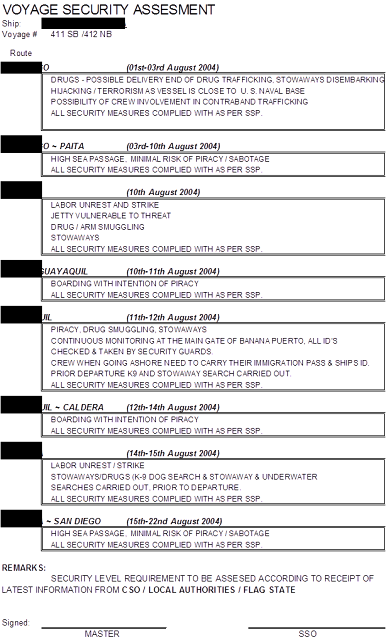 Figure: Copy of a Typical Voyage Security Assessment undertaken before commencing a sail.

This is supplemented by logs of additional information received, actions planned, pre-emptive measures taken, breach of security and changes to ship’s security levels.

This forms part of voyage risk assessment and prepares the ship for eventuality and responsible response plans. Discipline begins here as such planning minimises knee-jerk reactions.

All merchant ships have to document and follow clear action guidelines in case of adversity including piracy. They are to comply with the ISPS code and conduct regular drills, including at a company level which includes mock scenarios.

Records of these drills are inspected by PSC (Port State Control) officials. Any default results in punitive action and can even result in barring the ship from sailing.

Such documented rules detail preliminary tactics – both preparatory and on actual threat – under various security levels. In normal conditions, guidelines for security level 1 remain in force.

International ship policy documents mandate the marine safety and other broadcasts that must be made. The very same rules include the Ship Security Alert System; the SSAS is a covert alert mechanism with secretly positioned alarm switches to be activated in case of a piracy or terrorist attack. An unobtrusive satellite linked alert is automatically transmitted. Even mobile oil drilling units have these since July 2006.

There are regular safety net broadcasts especially for ships which update on safety and hazard situations. Each ship is obliged to be online 24x7 through special equipment. FYI, this region is NAVAREA VIII and under responsibility of India for navigation and weather warnings. Ships feed such alert systems with information and vice versa.

A ship has to have continuous records of drills and exercises, changes in security levels, breach of security, log of equipment tests, declaration of security, periodic review of security plan and conduct regular ship security assessment (SSA) prior commencement of every voyage. All of these processes are designed to prepare for and counter threats in the most efficient and regulated
--o--

Now, if “off-Kerala” was suspected pirate infested waters, then why‘d the ship risk coasting the shore line?! Were they not part of a ship reporting system – AMVER, INDSAR, INSPIRES or what have you? If you are running a risk, both company and captain would ensure participation in these optional safety reporting systems. She was en-route from Singapore to Egypt, which makes me wonder why after turning off Galle (south off Sri Lanka), she chose to skirt along the Indian coastline – the usual tv channel capture or mobile phone excuse, I presume? Anyway, this particular moot point can be passed off as a matter of navigational choice / national debate. [Mind you, most countries mandate that even when coasting off their shores, the ships must periodically report position and intent of their passage. Countries like Ecuador and Peru mandate this be done when passing as far off as 90 miles from their shores].

But what I would not bother to debate, is the homicide of fishermen, is the wanton firing on another boat, is the paucity of procedure and total lack of rule of engagement by the Erica Lexie as is assumed. And isn't this exactly what the damned pirates do?

Neither do I appreciate the fact that many 'certified' sailors tend to identify with those others on steel hulls and ignore the real brine that flows through those they look down upon, aboard slightly breached wooden boats, the fishing fraternity. My best Bo’suns and my best Able Bodied were from the fishing folk community and they were always far superior at the sailor’s work. The pressures and perils they face are not perceived by many, in multiples to what many others face and it includes the same pirates. It should definitely not also include the seagoing Merchant Ship!

Should there be more than meets the eye, investigation of facts shall bring those to surface. As the factual stands today, the incident seems a case of inadvertent homicide.